All picture credits go to my sister's boyfriend. Photoediting... can be blamed on me.

Disclaimer: Steampunk is open to interpretation. This is ours.

Rule one of steampunk is to add gears to things. Because our colors were lavender and silver, we didn't have much brass around. My wonderful aunt made our very lovely and very, very chocolate cake. She does the most beautiful sculpted flowers I've seen, so rather than making her do gears and things, we went with a more Victorian inspired cake and used a large gear for a cakestand. We also got our tin-type taken at the local reenactment museum, which is in the picture next to the cake. I now totally understand why everyone looks angry and stoned in those. You need the brightest light possible, and even then you have to hold as still as possible for at least 30 seconds. It's harder than it sounds. 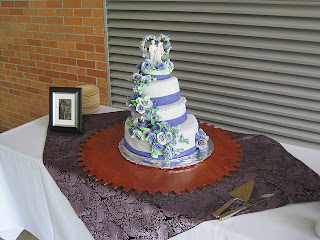 I made the bridesmaids fascinators (look, more gears!). Peacock was an unofficial color. These were surprisingly straightforward to do. 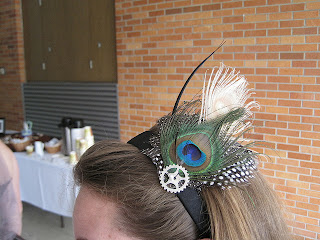 My bouquet was mostly ribbon and lace flowers, with various green leafy bits from whatever herbs looked healthiest that morning, which ended up being a mix of sage, dill, cinnamon basil and mint. Also pictured are my hat and Mr. ME's cane and our card box, which was probably the only brass thing around. 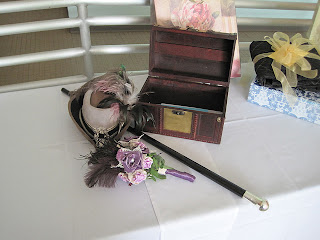 We did an afternoon tea reception, and sent the guests home with their own teacup to keep. Our caterers were totally fantastic and made everything less stressful. They solved problems before they even happened! 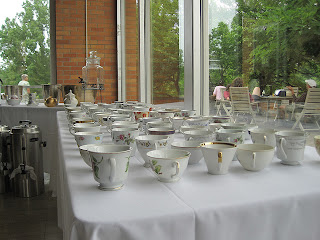 One of our bubble girls. The venue is a botanic garden, and we would have been required to cleanup any flower petals, so they got bubble guns instead. Mr. ME modded them to look extra spiffy, instead of neon green. The garden provided the parasols, which was unexpected by awesome. 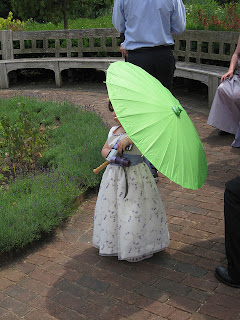 Our mutual friend performed the ceremony (based on Bill Nye's vows) with extra nerd references, including multiple Monty Python and Doctor Who references. And of course, The Princess Bride got a nod. The processional music was all from the new Doctor Who. Mr. ME is indeed wearing a Utilikilt. Also, we snuck in some googles on the officiant's head. There are tons of details, especially in his outfit, but I don't have any of those pictures. 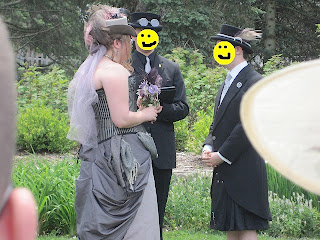 And for a better view of my outfit: 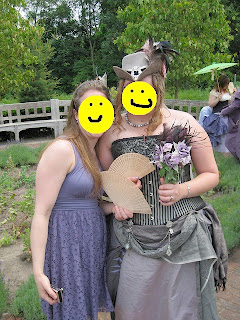 We had a lot of fun planning our wedding, but I'm glad that we're at the married bit. Though Facebook pretty much instantly changed ads from "weddings" to "babies"...
Posted by Miss MSE at 5:10 PM