Chemjobber posted earlier about this image: 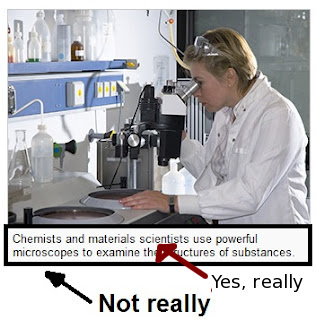 I've already commented over there about the issue, but I felt the need to elaborate. You see, microscopy is a *huge* part of much of materials science. As a simulationist, no, I'm not doing it on a daily basis anymore. I'm still my group's polishing guru when they need help with sample preparation. But in my prior research life at SnowTech, optical microscopy was as important of a tool to me as tensile testing and hardness testing, and far and away the best way for me to characterize a structure.

Let's look at a few examples of what we can learn from microscopy:

I took these images from a report I wrote as an undergrad. There are 5 different compositions of Zn-Al-Cu alloys, all made by die casting, all with fairly similar compositions (I won't frighten you with ternary phase diagrams just yet). From these images (sometimes with the help of SEM verification) I can do the following:

-Identify the major phases present
-Estimate the average grain size
-Estimate the porosity (I'm looking at you, D...)
-Identify impurities and inclusions present in the sample
-The order of solidification and phase transformations (with help from the phase diagram)

So why do I care about all of these things? Because microstructure affects macroscale properties. For this particular study, we were looking at creep, and because creep tests take *months*, we did tensile and hardness testing for kicks. The grain size and shape controls the creep mode. Large, soft primary particles allow dislocations to move rapidly, which is undesirable in this case. We can predict a significant amount about how the material will behave under elevated temperature/ stress just by looking at the microstructure, which is good, because I really didn't want to wait three years to get enough creep tests run to reach the same conclusions.

We also learn different things at different magnifications. Low magnification can show directional crystallization/deformation that would be unnoticeable at higher magnification, and is much better for quantifying porosity and primary phase fractions.

This is an AA6082 aluminum extrusion with an AA5086 weld bead run through it, also my own micrograph. You'll notice this is a much lower magnification than the previous collection. The sample has been fractured, but you can distinctly identify three major regions in the sample: the weld bead, the heat affected zone (where recrystallization has occurred) and the extrusion region, where the microstructure is unaffected by the weld. I can also see how the grains grew during solidification of the weld melt metal, and there's clearly a crack from the residual stresses caused by welding. Most of this can't be seen at higher magnifications


There are also many times when optical microscopy is *better* than electron microscopy. But ... big fancy expensive machine! It must be better! (cry the undergrads) The contrast in an SEM image comes from two things: topology and elemental contrast. If you want to look at the grain structure of, say, an Al-Si alloy, the SEM will show you very little, because Al and Si are both fairly low elemental numbers, and don't show much contrast. On the other hand, pure Al and the binary Al-Si phase look very different in an optical micrograph. In the above image, the Si-rich regions show as dark, and pure aluminum shows as bright white. And unless you want your airplane to fall out of the sky, you better hope that materials scientists are using optical microscopy for quality control checks.

And this has just been a discussion of optical microscopy in non-ferrous metals. I haven't even gotten to technical ceramics or composites, let alone steel and cast-iron. There are entire handbooks devoted to the microstructures of Fe-C alloys alone (which may be my next spiffy material).